Kafka's Metamorphosis: A Journey of Identity with Language as a Vehicle 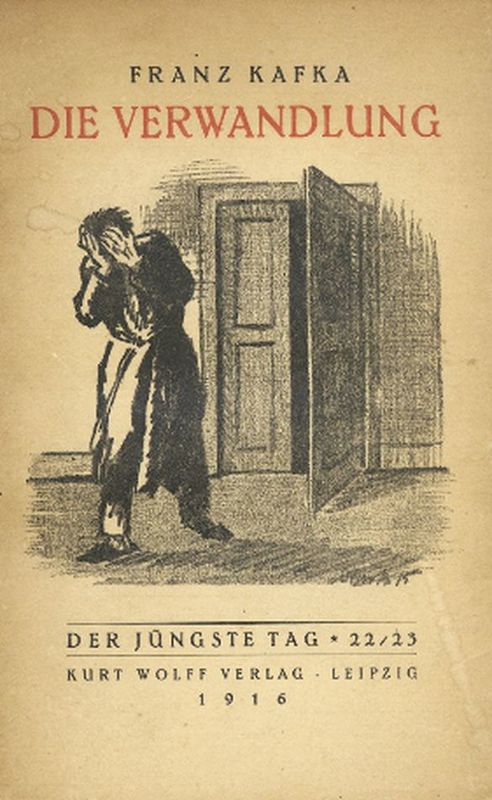 The original cover of Kafka's Metamorphosis, as the author intended it. Ominously, the cover does not contain an image of Gregor Samsa in his transformed state--the nature of his new form is left entirely up to the reader.

Kafka’s Metamorphosis is a magical realist, allegorical tale that touches on the theme most central to us all—that of struggling to find and express one’s own identity in a world of ever-present, all-consuming obligations. As this short essay will explore, the reader leaves the novel feeling unsettled and unsatisfied, imprinted—one might even say scarred—with the message that sometimes the world one lives in makes it impossible to ever express that identity and to have it understood.

The novella opens with a most preposterous scenario, immediately testing, and seeking to expand, the reader’s ability to suspend disbelief. The story’s protagonist, Gregor Samsa, has awoken one morning to find himself “transformed in his bed into a horrible vermin” (7). This first sentence puzzles the reader, as one is not yet sure what to think. What is meant by “vermin,” one wonders? Is Mr. Samsa dreaming? Is the mysterious narrator speaking figuratively? As we read on, we learn that no, Mr. Samsa is not dreaming. The narrator continues on to describe to describe Mr. Samsa’s shivering discovery of his new, grotesque self—“his armor-like back,” “his brown belly, slightly domed and divided by arches into stiff sections,” and “his many legs, pitifully thin” (7). Puzzlingly, however, Mr. Samsa’s reaction is not one of shock or horror. Instead, he refers to his own new form as “nonsense,” and immediately tries with all his might to get himself out of bed so that he can start his day, as though it were like any other.

Mr. Samsa’s reaction from this point on is packed with symbolic meaning. As he tries to get himself out of bed and exclaims “Oh God,” it has nothing to do with his new form! Rather, he completes his sentence by musing, “what a strenuous career it is that I’ve chosen! Travelling day in and day out. ... It can all go to Hell!” (7). He explores more of his new, unsightly body, and continues his thought, noting, “Getting up early all the time, it makes you stupid. ... If I didn’t have my parents to think about I’d have given in my notice a long time ago .... [O]nce I’ve got the money together to pay off my parents’ debt to him – another five or six years I suppose – that’s definitely what I’ll do. First of all though, I’ve got to get up, my train leaves at five” (7-8). Despite having transformed into some ambiguous bug-like creature, Mr. Samsa is so preoccupied by his work as a traveling salesman and his parents’ debt that he is unable to worry about his condition. His only thoughts are how he will get to work and get his family back on solid financial footing. These thoughts continue throughout the work, as Mr. Samsa thinks often about his family’s debt and how they will live without him. He feels his absence only as a provider, rather than a brother, friend, or son. 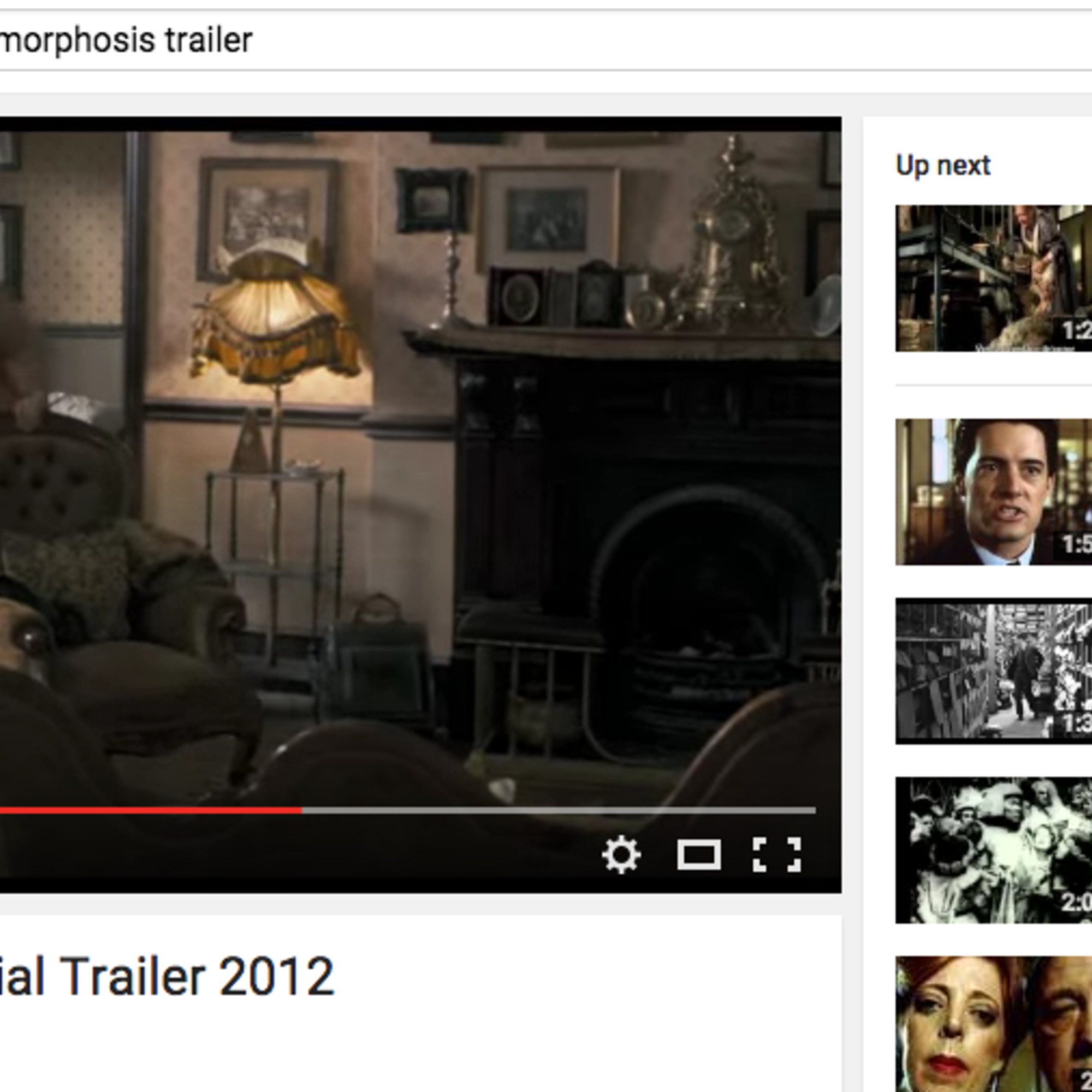 A trailer for a movie based on Metamorphosis, produced and released in 2012.

A reflective piece in The New Yorker discussing the difficulties in meaning of translating Metamorphosis.

We glean from this opening series of events that Kafka presents Mr. Samsa as a man so utterly controlled by the obligations of his life that his own identity—to the point of his very being as a human—became lost in the mix. Indeed, Kafka sustains this message by maintaining a shroud of mystery around just what Mr. Samsa has become. In the English translation, Mr. Samsa as presented as a “vermin,” “insect,” “dung beetle,” and “bug,” at various points, but the reader never learns for sure. In fact, Kafka was deliberately ambiguous, writing in a letter to his editor before publication that “the insect is not to be drawn,” so that the reader may form his own image (Jones, 2015). Moreover, Kafka’s original German term for Mr. Samsa’s new form, ungeheueres Ungeziefer, “poses one of the greatest challenges to the translator” (Bernofsky, 2014). The term comes from a Middle High German word that means “sacrificial animal” but that also “describes the class of nasty creepy-crawly things.” The English translation of “vermin,” however, evokes the image of a rodent, which is distinct. Though the lack of clarity here might simply stem from the ambiguities of language and translation, one might also view it as an instrument of meaning—that neither the narrator nor Mr. Samsa can precisely describe his new condition signifies the difficulty of coming to terms with one’s identity. Moreover, that Mr. Samsa dies in his new form at the end of the tale leaves the reader with the message that sometimes one becomes wholly swallowed by the various obligations that twist and pull on us all. 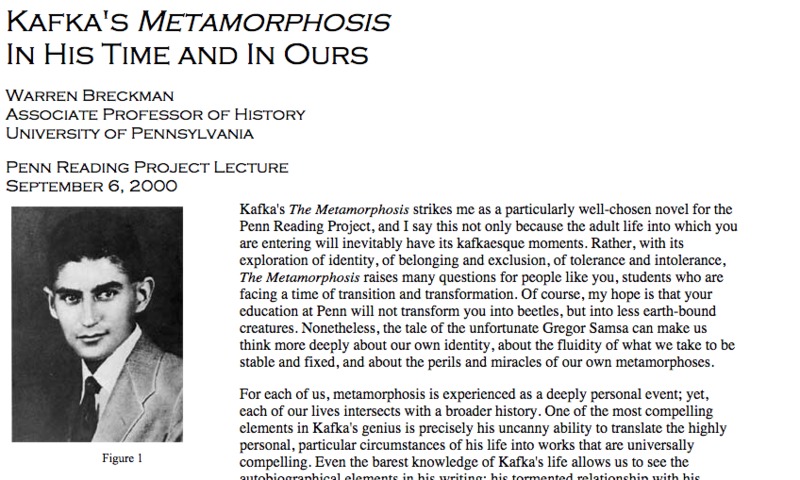 The text of a lecture from Professor Warren Breckman at the University of Pennsylvania detailing how Kafka's life may have influenced his writings.

A brief review of Kafka’s family and the context of his life provide added weight to this suggested theme. Indeed, according to those who knew and have studied him, Kafka felt a strong “sense of personal weakness and failure,” and resented his day job as a lawyer and as a bureaucrat with the Workers’ Accident Insurance Institute (Breckman, 2000). Just as Mr. Samsa, it seems that Kafka himself struggled to establish his identity—wanting desperately to please his father with his writing, but failing—and devolved into self-loathing. Perhaps Kafka viewed himself as a grostesque alien creature, distant from his family, and fretting about the fiscal obligations around him that he believed prevented him from enjoying his life. In that way, the realist element to Kafka’s magical realist tale comes from his own perspective on his life. While deeply autobiographical in this sense, The Metamorphosis is a tale to which all can relate, as it reminds us powerfully of the glaring monsters within us that we create to shield ourselves from the world.

Breckman, Warren. "Kafka's Metamorphosis in His Time and Ours." Penn Reading Project Lecture.

Jones, Josh. "Franz Kafka Says the Insect in The Metamorphosis Should Never be Drawn; Vladimir